Sometimes I use profanity when I communicate. This is going to be one of those occasions.

If the three branches of the federal government united tomorrow and declared that henceforth Autism Awareness Month would be named Autism Acceptance Month throughout the nation it wouldn't mean shit to me. Maybe I would have been excited about the meaning of such a possibility four years ago. I'm not now. You see acceptance without representation is not acceptance. What I have seen is an insufficient amount of representation, objectification of intersected populations across the entire autism community, whether medical model or disability rights and a great deal of ableism.

My lack of enthusiasm is rooted in the fact that autism acceptance is now defined differently by every stakeholder presently promoting the concept. Acceptance as it was originally presented by autistic disability rights activists like Paula C. Durbin-Westby, is being drowned out by people who aren't really receiving or disseminating the core message. They are simply trading one word for another without the foundational mind shift necessary to grasp what is meant by acceptance and apply it to their lives. Tolerance is not acceptance. Tolerance is putting up with something even if you don't like or agree with it. Acceptance is lending credence to something or agreeing with it. Right now, many parents, professionals, organizations, allies and famous autistic people with internalized ableism conflate the word acceptance with the word tolerance and that needs to stop. One's tolerance of nonspeaking people doesn't mean one accepts them. This conflated message is wreaking havoc on  the message and purpose of Autism Acceptance Month.

The way autism acceptance has come to be presented is very much the way equal pay for women has come to be presented. The voices heard were white and had large platforms from which to broadcast their message.  On those platforms, all intersected populations of women were used as poster children for the cause, while their voices were ignored or silenced. The equal pay act of 2009 was named after a white woman in a country where my intersected demographic, Black Latina women, earn 54% of what white males earn. Ms. Ledbetter and her peers earn 78%.  Despite the so-called victory of the Ledbetter act, that disparity is not being addressed. Because the conversation of equal pays only matters when the speakers are white, once pay parity between white males and white females is reached, the rest of the women, minority, disabled and trans,  women in poverty and abusive situations in which equal pay could be salvation from disaster, won't matter to society. So it is for the appropriation and skewing of autism acceptance. 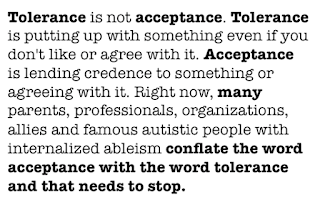 In the autism conversation, the demand for acceptance is false if acceptance means the exclusion or objectification of people of every intersected population in any acceptance model. If acceptance means only those who speak, and those who speak insist that those who do not use verbal speech are less than their peers with verbal speech, then that acceptance excludes and is thereby ableist. If an autistic woman is presented as our autistic mentor because she is famous and goes from TED Talks to book sales to conferences telling people that nonspeaking autistic youths  don't merit the resources that autistic youths who use verbal speech do, then that is not acceptance. That is ableism. If famous white autistics insist that they wish to continue carrying the label of Asperger's syndrome because they don't want to be associated with their peers in neurology who will always be visibly divergent, that is not acceptance. That is ableism and to both declare that one demands acceptance while rejecting one's own divergent peers is hypocritically ableist. If someone is presented as a neurodiversity expert who is white, cis, male and knows nothing about the needs or crises of intersected and nonspeaking autistic populations, but is constantly placed above autistic activists of color and neuroqueer activists and presented in the media as our leader and our expert on neurodiversity, then neurodiversity is being skewed to exclude intersected populations that have helped to bring the movement to this moment in history that is benefiting primarily white, famous, mostly male autistics.

My son and his intersected divergent peers have the human right to be accepted not tolerated. I shouldn't have to take the entire autism community to task for styling themselves superior to him or his peers.Yet here I am having to do so.

If families whose children have assistive technology and intensive speech services to communicate  now expect their children to become indistinguishable from their peers, that is not acceptance. If it is not understood that the presumption of competence requires the acceptance of all autistics, regardless of degree of disability, but stakeholders are unwilling to accept autistic community members who will remain with a degree of disability that will make them visibly disabled for the rest of their lives, then the message of autism acceptance is failing.

Here are some truths. Some autistic people also have intellectual disability that is severe. They have health concerns that are extremely disabling. If that makes stakeholders uncomfortable then the stakeholders are ableist.

We have to recalibrate the term autism acceptance.  A clear definition of what autism acceptance is must be stated in such a way that once any stakeholder attempts to use this term they will be held to a standard in which bigotry and ableism will not be tolerated. Those styling themselves experts in neurodiversity need to first root out their own internalized ableism, ableism against nonspeaking autistic people, racism and ethnic bias, homophobia and transphobia. Acceptance means accepting everyone autistic. Acceptance does not mean a country club for autistics who have achieved success to the exclusion of those who cannot do so because the world currently favors white, cis, autistics who can pass for allistic.

In a disabled population where 90% of the adults are unemployed, having a tech job fair for those who are verbal doesn't mean shit to me. My son is the child of a software engineer father and a former database administrator and linguist mother. He is allowed free access to a computer with no protection of the operating system from inadvertent tampering on his part. He has owned more than one computer. His sister's operating systems have repeatedly crashed over the years and hard drives have been reformated mainboards rebuilt and replaced, new computers bought. Our son is 13. He has spilled things on his computers, both PCs, and MACs, but he has never crashed an operating system, opened a computer virus or malware. Think about that for a moment. Yet my son would not be considered at any job fair for autistic people because he has no verbal speech and his AAC support is not sufficient to have him communicate his own interests or talent on electronic devices. A vast majority of autistic youth and adults, some who use verbal speech and some who don't, are in my son's position. They are not considered worth the resources when they are worth every resource available. Until our community gets that and works to lift all its members up, we will stagger along every autism month of every year, bleeding as catch phrases and terms are leeched from autistic activist culture and absorbed by the mainstream autism nonprofit industrial complexes for their own use at the rest of the autism community's expense.

We need to reclaim the term autism acceptance. We need to declare that acceptance means the true inclusion of everyone in our community. A community effort must be made to hold a mirror to ableist community members and show them the harm they are doing, demand they mature enough to accept everyone, and give our intersected members the agency in this movement they deserve.
Silently watching this happen without taking steps to make it right is enabling it.

Let justice be done, though the heavens may fall.

Post Script:
On the first day of Autism Acceptance Month, Paula Durbin-Westby wrote the following public service message, which needs to be emphasized and propagated throughout the autism community:

"PUBLIC SERVICE ANNOUNCEMENT. Remember, if you or your organization uses the words Autism Acceptance, Autism Acceptance Day, or Autism Acceptance Month, even if you also throw in "awareness," You are making a commitment to support NEURODIVERSITY because that's the essence of Autism Acceptance Day/Month, started by pro-neurodiversity, anti-cure Autistics. Please share. I think it is critically important that, as other organizations and people use the term "acceptance," that they use it in its original meaning for those of us who have worked hard to make Autism Acceptance an *alternative* to "I accept my child but I hate their autism..." rhetoric. Because I am struggling to keep my family supported, I can't be online every minute of April. Please think about this when you use it. It's Time to Take Back April! Autism Acceptance Day and Month. Pro-neurodiversity, pro-supports, and services, against "cures," AAD was started to counter April "awareness" stunts that demean us. It has expanded to become a way of viewing Autism in a positive and accepting way. Moving WAY beyond negative "awareness!" NOTE: NO cure-oriented posts will be accepted. This is Autistic Safe Space- nothing anti-autism or anti-Autistic. Thank you in advance! "

The Autism Acceptance Action by Paula Durbin-Westby can be found on Facebook at:
https://www.facebook.com/events/1693850024204283/