"Life, although it may be only an accumulation of anguish, is dear to me;
and I will defend it."

Nearly one year ago, I gave written testimony before the Maryland House and Senate regarding opposing the Richard E. Israel and Roger "Pip" Moyer End-of-Life Option Act. You can read that here:

Readers should also see the disturbing new study on exactly what has happened to the now perverted euthanasia laws in Europe here:

Where The Prescription For Autism Can Be Death

I am going to bring up my points of opposition to the annual reintroduction of this bill, adding this very critical point first. In the wake of the passage of or the Affordable Care Act (ACA), the rush to embrace euthanasia protocols is already having serious punitive consequences for terminally ill patients and this harm should disturb everyone. The myth of rebranding legalized assisted suicide as dignified and rolling out a new, hip lexicon of language to hide assisted suicide legislation under the guise of "empowerment" and "choice" does not change these laws opening the door to abuse, denial of insurance coverage for patients who wish to live and continue medical treatment to do so, and the expansion of the law beyond its intended scope.  With insurers going as far as flatly stating in their rejection letters to patients that they refuse coverage of life-sustaining care but will pay for euthanasia drugs, cases like those of Barbara Wagner and Randy Stroup make it quite clear that mandated assisted suicide places those with limited means in an inhumane and unacceptable ethical position that contradicts all vaunted "beautiful death"  or "choice of death empowering terminally ill patients" stories. 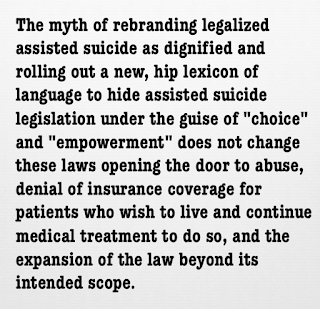 I oppose this revised bill.
My primary concerns:

1. Patients can request physician-assisted suicide if a doctor has diagnosed them with a terminal illness and six months or less to live. Such a prognosis is nearly impossible to accurately predict.  Please see my own story in the link above.

2. Historical evidence both here and in countries where such laws have been enforced for years show that regardless of the limitations or narrow verbiage of the legislation, said laws foster abuse, and expand to a scope beyond their original intent. Those impacted are vulnerable populations including those with disabilities the elderly, and those with a psychiatric disability.

3. The bill places medical professionals in an untenable position complicit in hastening the death of patients rather than fighting for their lives and dismisses the role of an entire branch of medicine dedicated to palliative care.

4. There is clear evidence that similar laws have already been  interpreted by insurers as a way of denying services for terminally ill patients who fit the diagnostic criteria for assisted suicide but wish to fight to continue to extend their lives, placing vulnerable patients in unethical positions while allowing insurers to push the end of life option to reduce costs.

No medical professional can accurately estimate the lifespan of any patient. Thus the inherent risk in basing a law on the idea of a medical declaration of a limited lifespan.

As I stated in my testimony last year:

" I am a resident of Montgomery County, and mother to a wonderful 13-year-old boy with multiple intellectual disabilities and nonspeaking autism.  Our son has many health challenges. I have a deep concern that if this bill becomes law, it will expand away from its intended purpose and become a danger to patients like my son.

The example of the Netherlands is a clear indicator of what happens when assisted suicide laws exist to be expanded upon. Quoting the Disability Rights Education and Defense Fund’s research into this matter:

“Herbert Hendin documented how assisted suicide and lethal injections have become not the rare exception, but the rule for people with terminal illness in the Netherlands."

“Hendin has also described how the government-sanctioned studies suggest an erosion of medical standards in the care of terminally ill patients in the Netherlands: 50 percent of Dutch cases of assisted suicide and euthanasia are not reported, more than 50 percent of Dutch doctors feel free to suggest euthanasia to their patients, and 25 percent of these doctors admit to ending patients’ lives without their consent.[107] Further, he reported that, for a thousand people each year in the Netherlands, physicians have ended their patients’ lives without consulting the patients.[108]”

Our State legislature voted to make physician-assisted suicide a felony in 1999, and rightfully so. This bill is very open to the abuses and decline of palliative care happening in the Netherlands. It makes me fear for our son’s well-being and for the future of our great State. Our General Assembly is ahead of its time in many decisions it makes and laws it passes, but this bill is not a step forward. I fear it is a step off a cliff."

Where The Prescription For Autism Can Be Death
http://tinyurl.com/hjleqwk

The Furor Over Death Drugs and the Cases of Barbara Wagner and Randy Stroup
http://abcnews.go.com/Health/story?id=5517492&page=1

My Terminal Illness Survival Story as testimony before Maryland Congress
http://intersecteddisability.blogspot.com/2015/03/on-marylands-death-with-dignity-act.html
Posted by Kerima at 9:16 AM