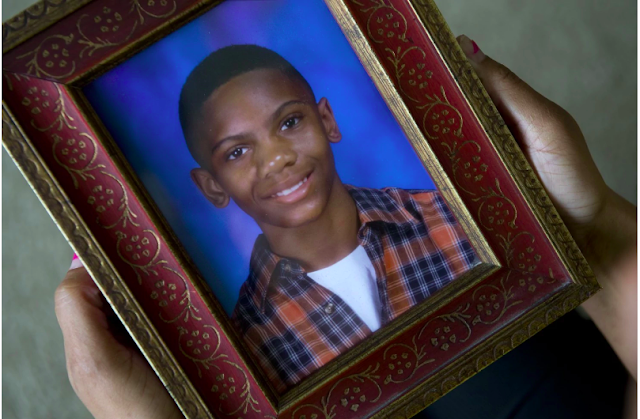 This is what I know about Stafford County, Virginia.

When certain members of the community wanted the Confederate flag removed from flying high above the county in public administration and public service areas, the county solution was to move the pole so the flag was still large and visible from I-95 but could not be removed because it was now on private property where it remains to this day.

Stafford County is the the place where Reginald Neli Latson, #AutisticWhileBlack, student and beloved member of his high school wrestling team, sat in front of a library that was unexpectedly closed, not knowing that his life would change forever because a white person didn’t like an African American teen just sitting in front of a public space. So that white person(or persons?), nebulous personae who had shifted to become teens, children, a concerned passerby, a crosswalk guard, but whose identity has been protected to this day, made a 911 phone call reporting an armed Black male in front of the library who “looked suspicious.” Neli was unarmed.

Stafford County is the place where an off-duty school resource officer wanted to arrest Neli for something, and when all his questions had been answered and Neli was walking away he said in that way that power addresses the marginalized, “what’s your name, boy?” knowing that in Stafford County it is against the law not to give your name when a law officer asks for it.

Oh, I was just as happy as everyone else when Bree Newsome took that flag down from the Statehouse grounds in South Carolina. But that single act, while it has brought all the Confederate flags flying inappropriately in public spaces as well as displays of other symbols of the failed Confederacy everywhere  including  in our National Cathedral to prominence, it doesn't  in and of itself resolve the problem of racism. The fact that it flew there at all is a greater statement to the structural nature of the bigotry we are facing than the attempts to remove these objects from public spaces are.

I know Stafford County as the county that avoided confronting activists like Bree Newsome by relocating their official Confederate flag on private property and continuing to fly it proudly.

Now we have this new argument that it should not be flown in view of I-95. Local residents, who drove by it for years without questioning but who are afraid Stafford County might become the site of another Charlottesville are now pushing for its removal. But it is not enough to ask that the right thing is done or do the right thing oneself for the wrong reasons. If the flag and all the ugliness it stood for is still firmly planted in the hearts of the people of Stafford County, it should remain flying as a warning to everyone that justice does not abide in that place.

To the rest of African American families across the nation. Perhaps it is time to let those who want to keep the outward manifestations of their own hatred, those who need to embrace the losing side of history reveal themselves. We need to know what is in the hearts and minds of our neighbors. Let them come out of the shadows for all to see. We need to know the scope of what we are facing.

I fear we are returning to a time where we will all need a digital version of the Green Book, and a Confederate flag dotting the map of these unsafe hate filled spaces will let us know that those who govern these spaces espouse white supremacy. We need to use our spending power elsewhere.

I have no wish to visit or even pass through Stafford County Virginia, though I am certain that good people reside there. Many of them came to court and petitioned the judge in Neli Latson's trial for clemency. But I cannot forget the destruction of his life and the heart breaking saga of his tremendous suffering. I cannot forget the retaliatory convenience of the arrest of his mother when her fight to free her son drew too much negative media attention on Stafford County. I cannot forget being forced to watch helplessly as her life fell apart for the sin of trying to save her son from a grave miscarriage of justice.

What I know of Stafford County Virginia will always make it a place marked by the white blight of racial and ableist injustice.

Let them keep their flag public. May those who love the Confederacy drape themselves in it and parade around. We need to know who all of them are. Out of the shadows all of you and all your enablers too. This ugliness and ignorance cannot end otherwise.

I have no wish to go to Stafford County Virginia. Not just because of the ghastly Confederate flag flying over I-95.

I can't risk that he might be next autistic male of color to look suspicious while there.

About Neli Latson:
Latest News:
https://www.courthousenews.com/judge-oks-autistic-inmates-claims-abuse/
Leroy Moore's article:
http://sfbayview.com/2012/01/update-on-neli-latson-and-his-mom-im-home-and-soon-my-son-will-be-free/
By the Washington Post's Ruth Marcus:
https://www.washingtonpost.com/opinions/ruth-marcus-in-virginia-a-cruel-and-unusual-punishment-for-autism/2014/11/14/9d7f6108-6c3b-11e4-b053-65cea7903f2e_story.html?utm_term=.76c965c253f7
#FreeNeli On Storify
https://storify.com/kerima_cevik/freeneli-1
InterSected on Neli Latson:
http://intersecteddisability.blogspot.com/2014/11/making-neli-latson-matter-invisible.html
Who is Victor Hugo Green and what is the Green Book?
http://www.pbs.org/independentlens/blog/green-book-helped-keep-african-americans-safe-on-the-road/
Posted by Kerima at 12:34 PM